Prevention and repair of leaks in fuel storage tanks

You are faced with a difficult choice. You have a single-walled underground tank that possibly no longer satisfies the current provisions relating to environmental preservation (VLAREM). If a leak occurs, part of your tank contents (and thus also part of your working capital) will drain away, without you noticing this. A waste of money, but this also places a heavy burden on your corporate finance due to the mandatory clean-up of the contamination caused.
Why not just replace the tank? This is a possibility, but then you will be faced with the mandatory cleaning-up costs and with high structural costs for installing a new tank. The law also states that an unused tank may not just remain in the ground. Moreover, a tank from the new generation is not necessarily better than the one that you presently have.

Cibor has an alternative for you. Cibor protects your investment by converting your existing tank into a double-walled tank, possibly repairing it, or lining it. This sustainable solution enables you, after processing, to safely continue using your existing tank. You enhance your image as an environmentally-friendly company, and alleviate the burden. Your tank is renewed, fully in accordance with the current environmental legislation, and it is also still affordable. Cibor guarantees this.

Prevention starts with a reliable tank check. Cibor checks your underground tank using the latest techniques and state-of-the-art tools. Via a combination of pressure testing, visual checking and thickness measurements, we not only detect leaks, but also find the weak places where perforations can possibly occur in the future. 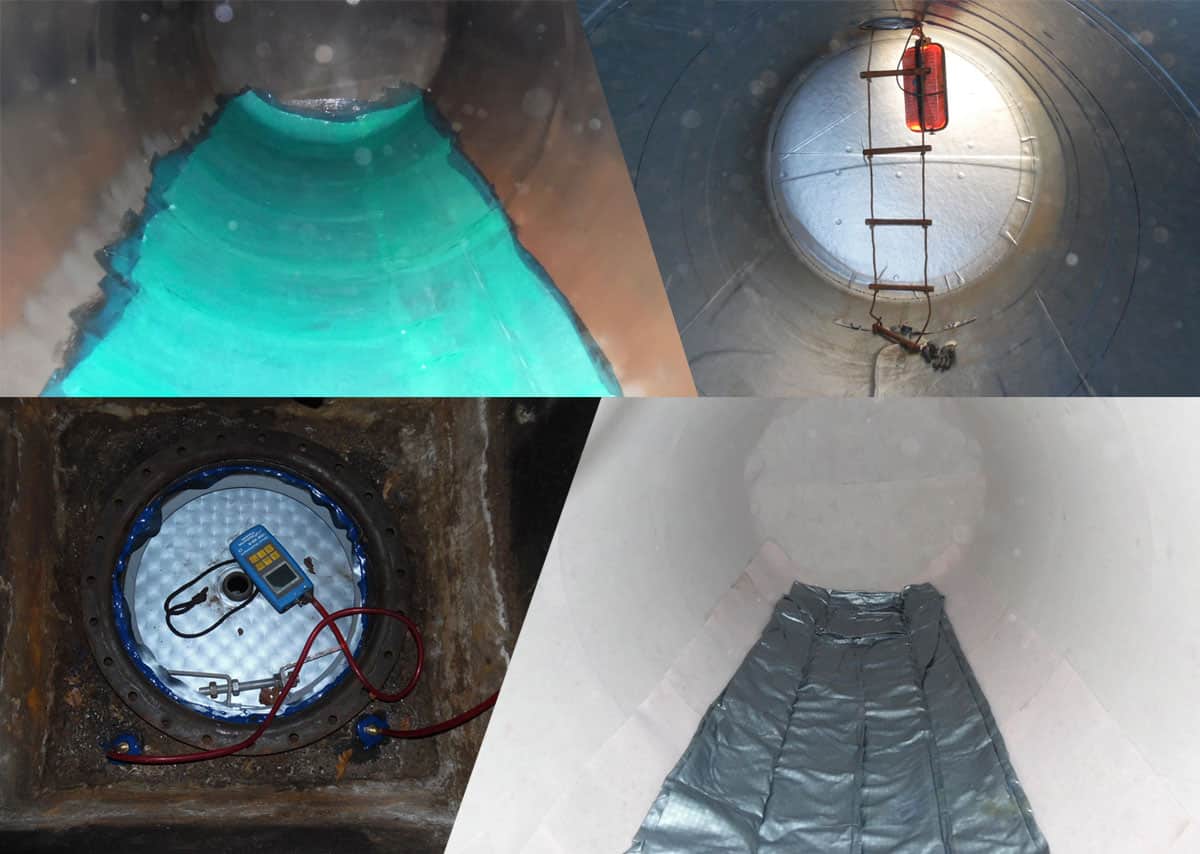 Any leak is expertly repaired. Cibor has a range of specially-developed coatings that stop internal and external corrosion. Perforations are permanently repaired or prevented.

A polyester or epoxy resin lining (possibly glass-fibre reinforced) is applied, under high pressure, to the inner wall of the tank. This coating stops all corrosion from the inside and bridges all perforations due to outer wall corrosion. The thickness and the type of coating depend on the condition of the tank:

Cibor installs leak detection systems with a double tank wall. This system has the following benefits:

Cibor converts your buried single-walled tanks into double-walled tanks. A made-to-measure inner wall is placed, via the man hole, into the tank and inflated under pressure so that it perfectly assumes the shape of your existing tank. A leak detection device creates a vacuum in the space between the tank wall and the membrane. In case of a leak, the vacuum drops below the preset alarm level, and the leak detection system activates the alarm (acoustic and visual alarm). You know that there is a problem and can take the appropriate measures. The double wall ensures that the product cannot escape.

4. Coating and double-wall conversion of petrol and chemical tanks

For petrol tanks and tanks for the storage of chemicals, CIBOR nv offers the DOPA system in order to equip the tanks with a permanent leak detection system with double barrier. After cleaning and degassing of the tank, this is internally inspected. If serious contamination due to corrosion of the inner- or outer wall is ascertained, a protective glass-fibre reinforced lining can be applied as a mechanical reinforcement. The inner wall is then conditioned, sandblasted and dedusted. A preserving lining is then applied to the steel wall with a special Airless spray device. This 2-component lining has an extremely high resistance to chemicals. After hardening, a special spacer is installed that is used to create a gap. Glass-fibre is laminated to this spacer so that a 2nd artificial inner wall is created in the tank. A vacuum (up to 800 mbar) is created in the gap in order to check the airtightness of the inner- and outer walls. After the airtightness of both walls has been ascertained, a final layer is applied (as a finish) that has an extremely high resistance to chemicals. This layer also guarantees the electrical conductivity in order to enable later safe use of the tank. Naturally, during the assembly, the lining, hardening, conductivity and layer thickness, and the quality during each implementation phase are guaranteed by control measurements on non-porous surfaces. The integrity of the tank is then permanently checked by an Eex-leak detection device that continuously monitors the level of the underpressure in the gap. As this relates to a standing vacuum, this underpressure must remain the same, day in day out, year in year out. False alarms are ruled out. The alarm is only activated if one of the two walls of the tank leaks. However, contamination is not possible provided that one of the two walls remains tight. You have time to take the necessary measures without having to worry about high clean-up costs. This system has also been repeatedly used to re-equip double-walled steel tanks with a permanent leak detection system with double barrier because the outer wall was defective. So the tanks did not have to be dug up. The DOPA system was developed in Switzerland and has already proved its worth for more than 25 years in Switzerland, Germany, the UK, Italy, the Czech Republic, Croatia, Spain, etc. The oldest installation implemented in Belgium dates from 1994. It has already been certified and approved more than 10 times by SGS. The system is also equipped with a prototype approval for Flanders and has already been widely used in Brussels and Wallonia.

There is always a Cibor technician nearby
Make an appointment

Do you have a leak or can we help you in another way?

If you cannot use your bathroom for 3 months due to a leak, then it is great to discover Cibor. We were able to enjoy a nice, warm bath again within the space of 4 days…
☆ ☆ ☆ ☆ ☆
5/5
Read more

Do you have a leak or can we help you in another way?

Satisfied customer after technical assistance in connection with an expertise

“Your technician and your company added again an extra value to this expertise.”

Yes, Cibor may process my data and send me information which, based on the processed data, could be of interest to me.